Back in the year 2000, my father turned eighty. I was at a loss as to what I could give him to celebrate–like many another elderly gentleman, he had everything he needed and wanted nothing. I’d heard that the White House would send birthday greetings to seniors on their reaching major milestones: eighty, ninety, and one hundred years old. But Bill Clinton was president at the time and I knew a greeting from President Clinton would never score high marks from my father, a staunch Republican. Instead I wrote the office of former president George H.W. Bush requesting an eightieth birthday greeting. My father delighted in the surprise. He beamed as he took the page of George Herbert Walker Bush stationery (the Bush name and office embossed in gold at the top) and the accompanying photograph and held it out to his friends. They themselves were all eighty and now green with envy, which also delighted my father.

He never knew how Bush had known his birth date and I chose not to enlighten him. All he could think was that he like Bush had served in World War II as a pilot and somehow that bit of information had made it to the president’s desk.

I’ll always hold a little place in my thoughts for the former president, especially this week as the country mourns his loss. The White House had actually stopped sending eighty and ninety year-olds greetings, reserving the honor for those who hit the century mark. Bush did not have to make the effort, but a piece of paper, an envelope, and a stamp were all it took to make one man’s day.

There’s a footnote to this story of a close encounter with a president. In 2010, for my father’s ninetieth birthday, Barack Obama was in office. I didn’t miss a beat. I sent a birthday greeting request to former president George W. Bush’s office. Once again, in days, a gold-embossed greeting arrived. My father framed the letter and hung it beside Bush 41’s letter.

Wind the clock back to 1989 and a near close encounter. Weeks after the 1989 Loma Prieta earthquake, undaunted, my husband and I traveled to San Francisco where I was interviewing for a job. My husband spent the aftafternoon touring the city and, yes, as a curious east-coaster, the large swaths of the downtown damaged by the quake. As he walked, he snapped photos to share with me later.

On one nearly vacant street lined with pancaked buildings two men were also viewing the damage. One of the men dressed in a dark suit resembled Richard Nixon. My husband crossed the street for a closer look, and, sure enough, the stocky, gray-haired man, with heavy jowls was the 37th president. The other man was Nixon’s lone secret service agent.

The president extended his hand immediately and engaged in a brief chat. The two talked of their North Carolina heritage, my husband mentioning his years at the University of North Carolina, and Nixon responding, “I’m a Duke man myself.” After a few more comments, the observent security agent noticed the camera bag slung over my husband’s shoulder and asked, “Don’t you want your picture taken.” 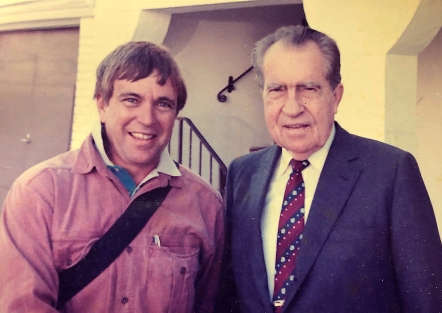 President Kennedy visited Tampa, Florida on November 18, 1963, just days after my family had returned to the United States from years abroad. We were living in temporary quarters, packed into two tiny adjoining hotel rooms, one for my parents the other for my brother, sisters, and me. At noon, my parents left for another round of house hunting. “If you want something to do,” my mother offered, “why don’t you go to the corner? You might see the president on his way to MacDill.“ MacDill is the air force base where my father would soon work and where Air Force One was waiting. In four days, it would take him to Dallas.

As a 13-year-old, enamored by all things American again, the thought of seeing the President of the United States in person or even his car drew us like a magnet. Our timing was perfect, in minutes a police motorcycle appeared, and behind it the black limo. When the open-topped limo reached the corner where the four of us and a handful of adults stood and waved, the car slowed. The president half rose from his seat, bent slightly at his waist, and nodded, acknowledging even this tiny group. Whether he could see, our star struck, awed expressions or hear our meek applause, I’ll never know.

A photo by Tony Zappone captures what I witnessed, although my view was much later in the day when the crowds had vanished. (Zappone, a similarly awe-struck child, photographed the events of that day and place this photograph on the cover of his book, John F. Kennedy: An Amazing Day for a President and a Kid with His Camera.